When people meet us, they are always curious about how we met, where we met, etc.  After living in the States for so long now, people just assume that we met here.  But here’s the real story…

I moved to Bogota, Colombia right before New Years in 2007.  I was invited to teach music at an international school, and knowing that a lot of my world would be in English, I asked if it would be possible to live with a Colombian family instead of with the other teachers.  I was placed with a bi-cultural pastor’s family.  We didn’t know anything about each other until I arrived, but we quickly found out that the Lord had indeed put us together!

They invited me to go on a retreat they were leading with a different church my first weekend in country. It was during that trip they discovered that I was a worship leader/speaker, and we had a BLAST ministering together. I learned a TON of songs in Spanish, and was on my way to becoming bilingual (although I had a LOOOOOOONG way to go).

The following weekend, I had been spending time with the English teachers when I got a call from the pastor asking if I would be willing to play the drums for the services the following day.  He said that their worship team had a few different drummers, but that none of them were available.  I immediately agreed and rushed back to their place so he could take me to the church.

I showed up without makeup, in a t-shirt, baggy torn jeans and crocs.  Lol!  (if you know anything about Colombian women, they would NEVER dress like that…).

None of the guys on the worship team spoke English, and, as Leo later told me, upon seeing me they decided to change the set list to translated Hillsong songs instead of their typical latino-flavored songs.

I had a blast!

I think the guys were a little surprised that I could do it.

After the rehearsal, the electric guitarist (Leo) stuck around to wait for the pastor to pick me up.  I literally had no idea how to say anything about music or life at that point… and he didn’t really know how to say anything about life and music to me, either… but somehow, after sharing our names, how old we were and how many siblings we had (thank you Spanish 1), I communicated that I write music.

Leo immediately turned on the keyboard and asked me to sit and play him something.  I started playing “We will praise You” from my Captivated:Live cd, and just as I got to the 2nd verse, Leo stopped me.  He said…

“No. No. No…. Jazz…. colors!” and then proceeded to hum the melody of the song and completely changed the chords to sounds I would never know how to make in a million years.  I cracked up!  I remember thinking “I think this guy and I are going to be good friends!”

The pastor came right about then to walk me home (he lived only a block away from the church).

The following weekend, and the ones that proceeded it, I was a part of the worship team. We had rehearsal on Saturday afternoons, and then 3 services on Sundays.  In between the services, we would all go to the cafe across the street to get something to eat and I would try my best to communicate what I’d been learning.  In addition to the Sunday services, I started helping out with the youth services on Friday nights, and teaching lessons at the worship academy on Saturdays. I LOVED it!

Leo also happened to be involved with all of those church events, so it gave us a good deal of time together, sharing life and ministry.  He was hilarious, and an incredible guitarist/worship leader.  It was so much fun to find someone with similar interests and passions!

He started walking me home more, and the pastor would always invite him to eat dinner with us.  When Leo would get home, he’d sign on to Skype and we would chat (all written) while the pastor’s daughter sat next to me to translate and help me learn what to say back.  It was hilarious.  We were NEVER without a bilingual dictionary!

One day, I was walking with the pastor and asked him what he thought about Leo.  He said “Wow!  What a guy!  He loves Jesus, loves people and is always here serving at the church!  You really can’t find anyone better!”.  But then he went on to say… “But I recommend you wait 2 years before you start to date.  Get to know him better, get to know the language and the culture better… Here, Colombian christians take dating VERY seriously.  You first start out in groups, and then the moment you go out just the 2 of you, it means that you’re serious about each other.  Dating in our church culture means that you’re seriously contemplating marriage.”

I think 2 weeks later, Leo and I were sitting on the steps out in front of the pastor’s house talking about what we really felt called to do. And, it was exactly the same!  It was at that moment when I had the feeling “I think I’m gonna marry this guy!”.

It was during that conversation where Leo said that he wanted to be my “novio”… and out of respect for the pastor, I told Leo that he would have to ask permission from the pastor if he wanted to date me.

Sidenote: it had always been an agreement between my dad and I when I was in high-school that if a guy wanted to date me, he HAD to ask my dad first.  It was a safety-net for me and to this day I am so grateful!  If a guy called the house (you know… in the ancient days before there were cell-phones), my dad would ask me “do you want to go out with this guy?”  If I said “no”, then so did my dad.  I have always encouraged young girls who are starting to date to have this same arrangement with their fathers.  It is SO important for their safety and health to have their dads involved with any boys who have interest in them.

So, Leo and the pastor met and talked one evening.  They were in the living room, and I was in the kitchen cooking (the pastor’s wife was out of town).   I was SO nervous, especially after the pastor had said that it would be better to wait 2 years, and it had only been 2 1/2 months!

But both he and Leo came into the kitchen beaming… the pastor hugged us both and said “you have our prayers, our counsel, and our best wishes!”.

A year and a half after Leo and I met, we were married in Bogota!  We just celebrated our 9th anniversary. 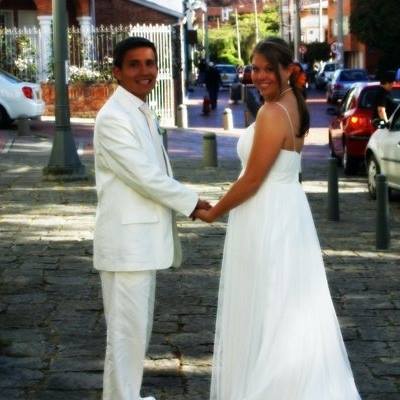 Our desire as a family is to be an extension of the Kingdom of God to all around us, living and speaking the truth of Jesus Christ; and as Leo and I are continuing to grow in our ministry as a couple, one thing is for certain: we are called to help develop youth in a lifestyle of worship, using their gifts to impact our world. As our hearts are truly for the “least of these”, it is funny how God put us right in the middle of upper-class Bogota. But, as we model what it is to love those who have less opportunities in life, our students are developing hearts for the same, and we are seeing that our passions are being multiplied exponentially through our students! This is a very exiting time for us as we disciple and encourage our students to continue stepping out for God, believing that He can do amazing things! View all posts by colombiatotheworld